The  time required for brine to have its  affect depends on the meat’s thickness. Let it soak for 3-4 hours per inch of thickness. Sugar will penetrate about 3 millimeters in 3-4 hours.

The most important part is the concentration; too much salt will actually pull water out of the meat, while too little salt slows the absorption rate. Ideally, a brine should have a salt concentration of six to eight percent of the weight of the water in the solution. Avoid acidic ingredients, such as citrus, or vinegar. Because brining usually takes between four hours and multiple days,  acid in the brine could denature the proteins too quickly, resulting in this weird texture.

Sugar molecules are MUCH larger than salt ions- over 10 times larger in cross-section and mass. So sugar  absorbed by meat much slower.  The diffusion rate is at least 5-10 times slower than salt. So, even after 24 hours of brining, sugar flavor only penetrates a few millimeters.

Brining will definitely accelerate browning, no matter what sugar you choose to use.  Heat and sugar speeds browning to the point where browning is significant after only 30 minutes in a 375F oven. Without absorbed sugar working in tandem with muscle protein, you would have to overcook the pork by hours to provide enough time for browning to occur merely from the small levels of naturally occurring sugar.

The brine surrounds the muscle cells with a high concentration of salt. This leads to salt entering the cell via diffusion. The  result is the muscle  draws in and retain water. The meat’s weight can increases by 10% or more, allowing for greater moisture in the food after cooking.

Feel free to play with the flavors in your brine. Perhaps the most common addition is sugar, which serves two important purposes in a brine. First, sugar softens the effect of the salt on taste, leading to a more rounded flavor in the meat. Additionally, the sugar aids in browning when heat is applied. Depending on your final flavor preferences, sugar can enter a brine in the form of granulated or brown sugar, or honey.

You can also infuse your brine with aromatics for additional flavor. Garlic, chopped onion, whole peppercorns, fresh thyme and bay leaves are all frequent additions. Avoid adding acidic ingredients, such as citrus, cider or vinegar. The acid denatures the proteins  too quickly, resulting in this weird, meat “ceviche”.   Stick to the salt water when brining for an extended time.

The  time required for brine to have its  affect depends on the meat’s thickness. Let it soak for 3–4 hours per inch of thickness.

When you’re ready to cook, rinse the brine off the meat, pat it dry, and prepare as desired.

Applying the salt separately and in advance is a technique called dry brining. Dry brining is simply salting thick cuts the day before cooking and thin cuts an hour or two before. Adding salt in advance is good for the meat because it melts on the wet surface of meat and it penetrates deep.

But something else happens. Salt is made of sodium and chloride ions that carry electrical charges. These ions attack the proteins, causing them to unwind a bit, a process called denaturing. These altered proteins have a greater ability to retain water, so meat that has been treated with salt remains moister through the cooking process.

When it is time to cook there is no need to rinse off the salt, it should all be inside the meat.  Once inside the meat it doesn’t go far. As with wet brining, it stays near the surface, but that’s where the moisture is needed because that’s were we apply the most heat.

Sprinkle the meat with about 1/2 teaspoon of  table salt (3/4 teaspoon kosher salt) per trimmed pound, wrap in plastic wrap to keep other foods from contacting meat juices, and refrigerate. 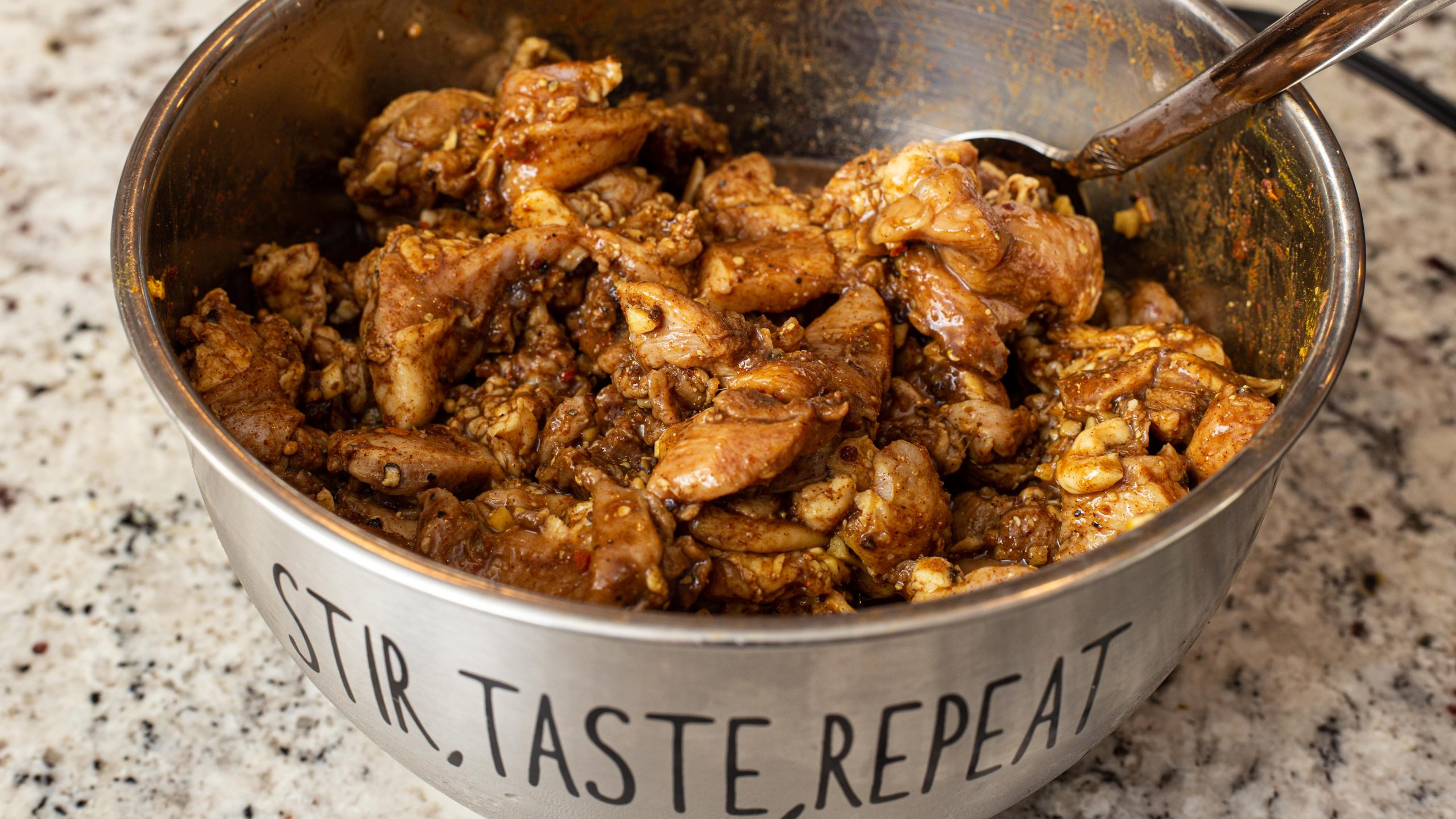 Marination is the process of immersing foods in a liquid often made with seasonings, and an acid or enzymatic component, to flavor and tenderize food. This liquid is called a marinade, and the term came from the use of seawater to preserve meat. The the word  marinade is derived from the word for sea (mare)  Marinated meats should also be refrigerated to prevent harmful bacterial growth.

For reference: The oceans salinity is about 3 1/2% or 35 g of salt per liter. This is also about the right amount of salt for a marinade.

A basic marinade recipe would be:

Optional 2 teaspoons of sugar. If you’re grilling over hey barbecue be careful because sugar can lead to excess caramelization- and burning.

Two types of marination include acidic and enzymatic marination, which both help break down the connective tissue in the meat.  Adding alcohol can also supplement the penetration of acid marination since fats present in meat are soluble in alcohol.  Wine thus make great marinades. Be careful not to over marinate the meat, as prolonged exposure to acid can cause it to have an odd texture.

Most of the herbs and spices we add to marinades are oil-soluble, which means they only release their full flavor when mixed in oil. So, to get the most out of a marinade,  include oil. But note: These flavors will merely coat, not penetrate, the meat. Meat proteins are saturated with water, so they won’t absorb the oil or its flavors.

Help marinades by slashing the food. Since marinades don’t penetrate very far into most foods, give them a hand. Slash  your food. Cut slices into the surface; this allows the marinade to penetrate deeper into the protein.

Use a nonreactive container. The acids in a marinade can react with aluminum, copper, and cast iron, and give the food an off flavor. So do your marinating in plastic, stainless steel, or porcelain, or, best of all, zipper bags.

Some rules of thumb if you must marinate

Always marinate in the refrigerator and cover the meat so it doesn’t drip on other food. Never reuse marinades. Thinner pieces marinate better.

Marinate fish for 30 to 60 minutes at most, depending on the thickness.

Zipper or resealable bags are good for marinating and they need less liquid than bowls or Tupperware.

Marinades, unless they are heavy with salt, in which case they more properly are called brines do not penetrate meats very far, rarely more than 1/8″, even after many hours of soaking.

Fish with delicate, flaky flesh (such as snapper, tilapia, or cod) can’t stand up to the acid in a marinade for long.  Fish follows a different set of marinating rules. A good rule of thumb is to marinate seafood only about an hour max; otherwise, you run the risk of “cooking” your fish with acid.

Enzymes help break down muscle fiber proteins. Enzymes found (in pineapple), papain (in papaya)  break down collagen. If the enzymes are in contact with the protein for an extended period they break down to meat to such an extent that it has a very odd texture. You can’t use canned pineapple because the enzyme is denatured in the cooking/canning process.

Rubs are aromatic and savory spice and herb mixes that are applied to meats to flavor them. Most contain salt which can help pull the flavorings into the meat. So put them on well in advance. The salt will penetrate deep. The other stuff does not penetrate more than a few milameters.